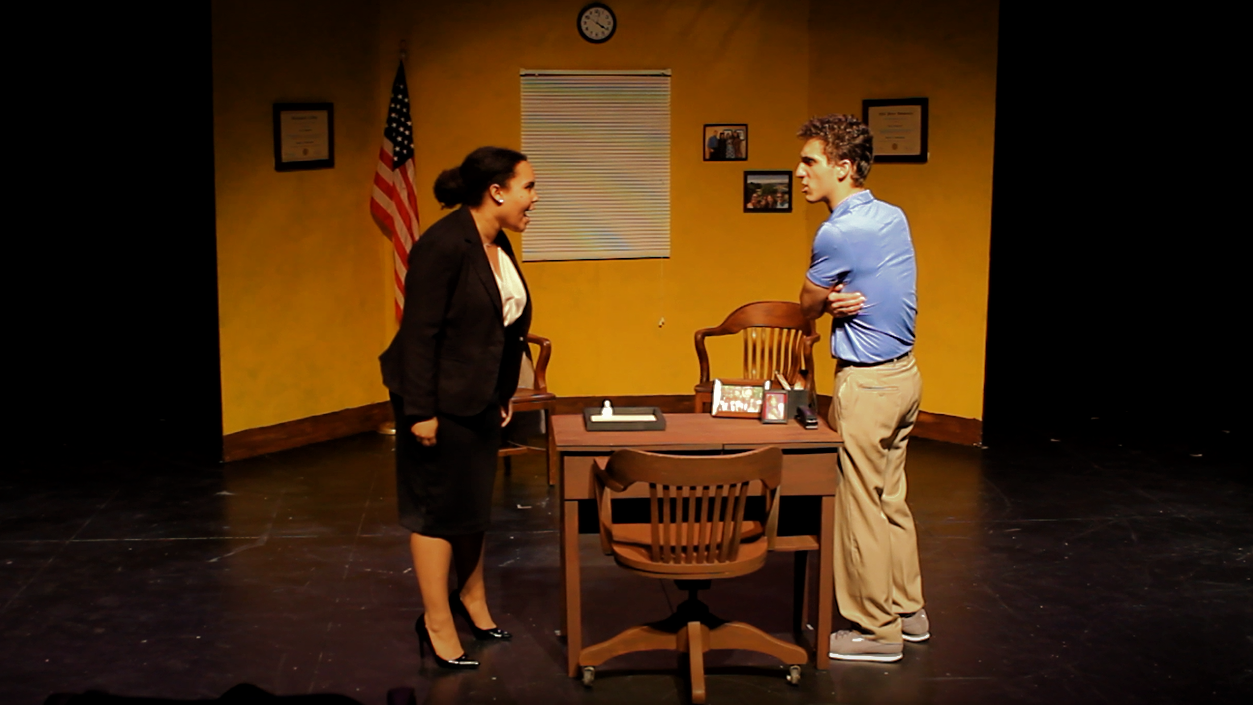 This is a Safe Space!, a new, one-act play by Peter Fields, premiered on November 6 and 7, 2017 At Kent State University’s EZ Black Box Theatre.

Both nights the house was nearly filled to capacity with theatre-goers, and the play was well received.  Before the preview night performance, the production team engaged in one final, full run dress rehearsal of the play which was recorded for presentation on the web.   The production features actors Grace Hunt and Marcello Valletta, and was directed by Libby Jackson.  The story: Two parents from separate families meet in the principal’s office to discuss an altercation between their sons. While they await the principal’s arrival, the parents begin a conversation which reveals the true nature of their sons’ embroilment and threatens to destroy the very foundation of their core beliefs.

The Interview, a one-act stage play written by Peter Fields, will be performed along with three other plays at the First Annual 80 Minutes Play Festival at Western Reserve Playhouse in Bath, Ohio.

The story centers on a high school newspaper reporter named Gabe who meets with Gerald Harris, a school board member, for an interview seeking Gerald’s opinion on allowing Gay/Straight Alliance Clubs in public schools. Ultimately, as the interview progresses, both individuals reveal hidden motives and long kept secrets.

Western Reserve Playhouse’s production of The Interview is directed by Karen Rose.

The three other one-acts selected to play at the festival are:

A Match Remade in Heaven written by Amanda Terman, Directed by Brianna Laybourn

These performances will be held October 6 and 7 at 8 pm with a matinee at 2 pm on Sunday October 9, 2017 as part of the 80 Minute New Works Play Festival.  Tickets are on sale now.

Peter Anthony Fields’ latest one-act stage play entitled This is a Safe Space!  will premiere on November 6, 2017 and play through November 7, 2017 as part of the Erdmann-Zucchero Black Box Series at Kent State University in Kent, Ohio.  Curtain time for both nights is 7 pm.

The play, which is directed by Libby Jackson, centers on what happens when two parents from separate families meet in the principal’s office to discuss an altercation between their sons.  While they await the principal’s arrival, the parents begin a conversation that leads to a place which reveals the true nature of their sons’ embroilment and threatens to destroy the very foundation of their core beliefs.

Jackson is currently assembling her production team and will begin casting soon.

Also playing on the two nights with This is a Safe Space! is Tekla Gaughan’s Abortive.

Little Beth Entertainment, Ltd. is proud to officially have The Rocketry Show podcast as part of our production lineup! The Rocketry Show was started by Little Beth member, Cornelius Gould in 2014 as part of his side company, Legato Communications, and has grown into an online audio home for amateur & hobby rocketry news!  The show is hosted by he, Jim “Gheem” Seibyl, and Daniel “The Rocket n00b” Petrie.

The show also produces videos that go along with the hobby for topics that work better with pictures vs. words.

Little Beth Entertainment has been part of the production from day one, mainly with assistance on video programs, among other activities over the years.  Now the involvement becomes official in all areas.

This video makes a perfect introduction to what the show is all about.  Enjoy!

Here is a performance of his work, “About Michael” as performed by the Sky Blue Theatre Co. in the UK.

Sky Blue Theatre present the British Theatre Challenge Act II at the Lost Theatre. This play is About Michael by Anthony Fields

This is the first performance of the stage play “The Interview” (which was adapted for the screen as a Little Beth short film) available for free viewing online!